Motivations for Caching of HTTP Resources

The basic idea of HTTP caching is to make network usage more efficient and to reduce the load on webservers by storing resources that have been requested from a webserver in a „cache“, and if user agents request the same resource, and if the result of that request would be equivalent to the result of the last request of that resource, serving that resource from the cache.

The caching of HTTP resources can also involve transformation or requests and replies, such as redirections, downsampling of media content or malware scanning and removal.

In the following, a web client program operated by a user, be it a command-line client such as „curl“, a web browser such as „firefox“ or a tool with HTTP client functions such as „apt“ are all called „User Agents“.

Programs that have the purpose of storing resources rendered by web servers for caching are called „Caches“.

A „webserver“, for the purpose of this text, is an authoritative source for the retrieval of certain resources via HTTP. More precisely, a webserver is a server process that generates the original, non-cached version of a resource that is identified by an URL protocol://server:port/uri if a web client contacts a network address of server on port port (tcp) using protocol protocol (which can be „http“ or „https“) and requesting uniform resource identifier uri. 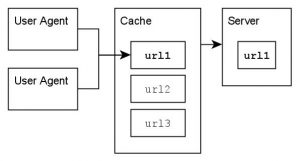 Intermediate caches are often implemented as web proxies (see below), they act as HTTP servers towards user agents and as HTTP clients towards webservers.

Information about caching-related expectations from HTTP methods can be found in [RFC 7231], section 4.2.3 (Cacheable Methods) and subsections of section 4.3 (Method Definitions) and section 6 (Response Status Codes).

[RFC 7232] specifies conditional HTTP requests, which can be utilized for efficient cache updates.